Become part of the community, tell us your Mixing Story!

Live and on the spot Product Tips Reports

These articles could also interest you:

Quick and inten­sive mixing with the Xo duo double spind­le... 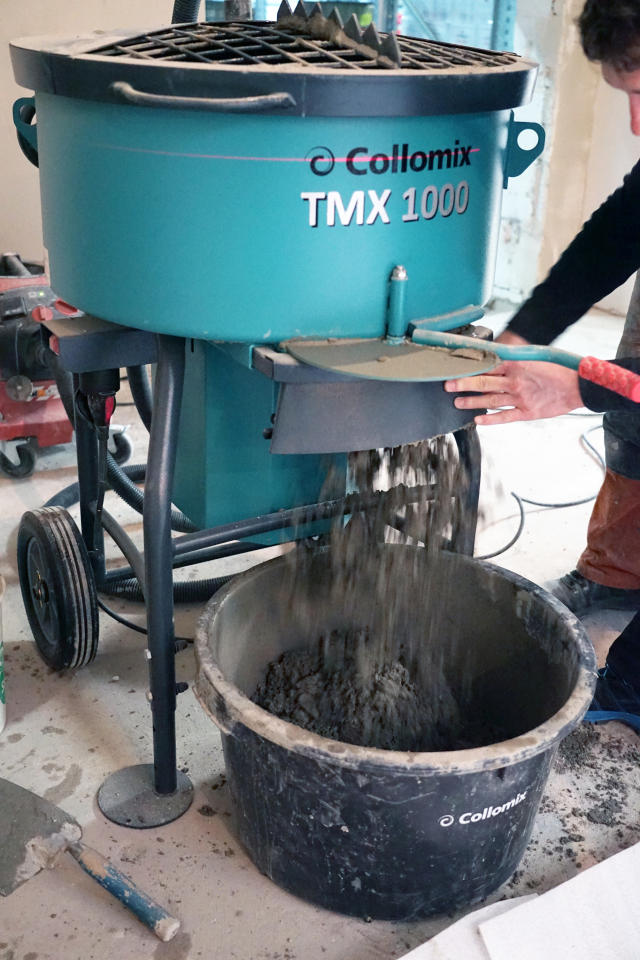 3.5 tonnes of dry material, three tradesmen and not much space – these were the conditions for the contract awarded to master tiler Jens Werner from Sternberg, Lower Franconia: 31 square metres of tiles had to be laid in the kitchen area of a company canteen. It was necessary to install cement screed as a subfloor beforehand. The challenge: The construction site was located on the first floor of a company building and installation had to be carried out during ongoing operations.

For Werner and his staff, this meant working in cramped conditions. In addition, the installation was to be carried out while regular business operations were taking place – and with as little disruption as possible. When selecting the cement screed, Werner opted for the ready-mixed, fast-setting screed Novoment M3 plus by PCI. Even though the cement screed had to be applied to a relatively small area, around 3.5 tonnes of material were required. This was due to the installation height of 70 – 80 mm.

When selecting suitable mixing technology, Werner opted to use the Collomix TMX 1000 forced-action mixer. BayWa Würzburg customer service was helpful in this regard, delivering the Collomix forced-action mixer directly to the construction site at short notice. This mixing device ended the search for the ideal solution for mixing the heavy material. This is because the Collomix TMX 100 can, in one mixing process, prepare three 25 kg bags of screed for processing simultaneously. 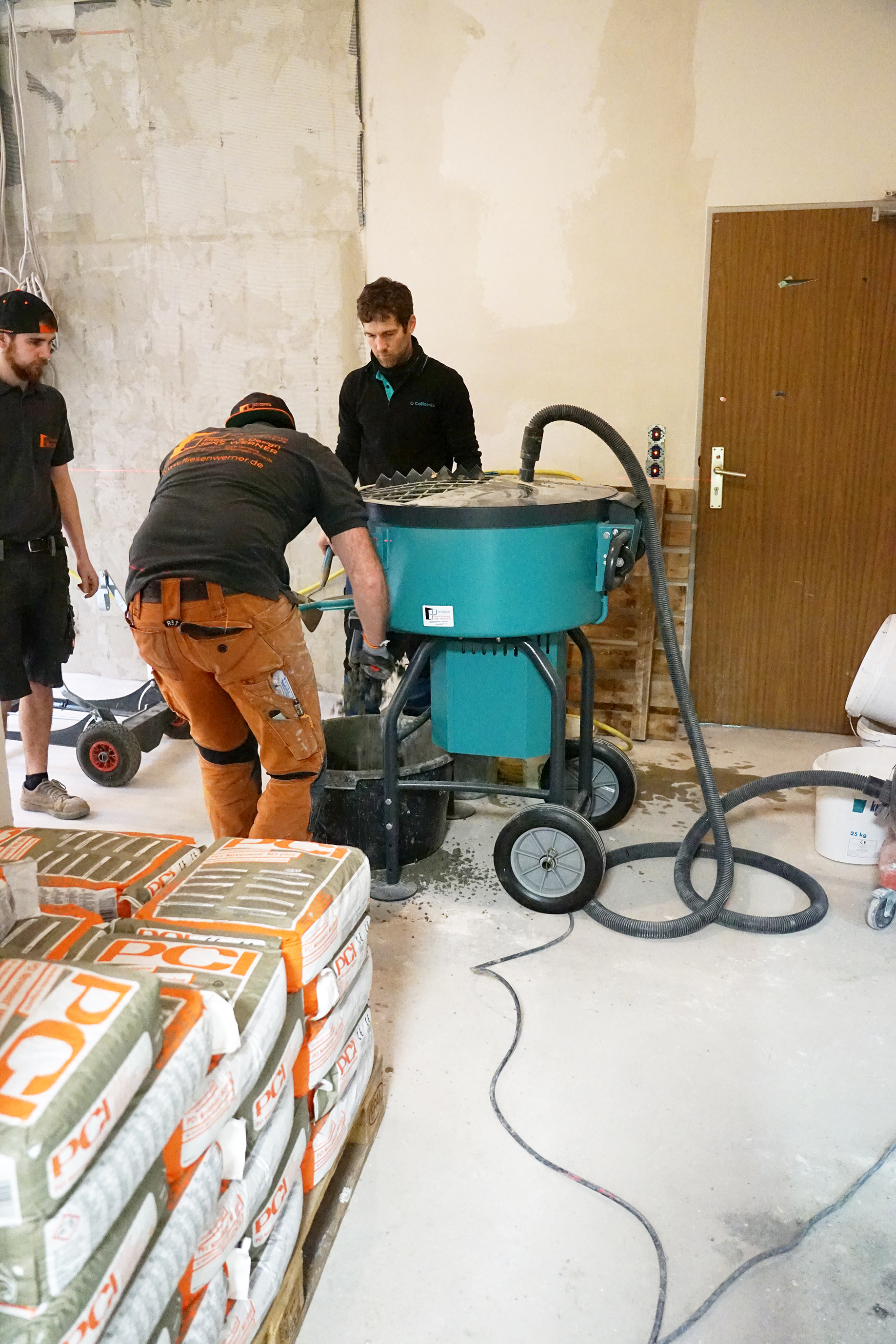 Dust-free mixing with an optimum result

The Collomix TMX 1000 forced-action mixer is particularly suitable for use in confined spaces. This is due to the fact that material can be filled into the mixing drum of the mixer directly from above, whereby a bag ripper opens the bags and the contents land exactly in the mixer. The mixing bucket offers a volume of 100 litres – ideal for three to four bags of the chosen material including the requisite mixing water. The three-armed mixing tool grips the material in its entirety and, with 30 revolutions per minute, ensures a thorough mixing of the heavy mass. This yields an optimum mixing result.

Unlike a conventional concrete mixer, the granular, earth-moist material on the bucket wall and floor of the TMX 1000 cannot escape and is completely captured by its mixing tool. At the same time, the material is consistently broken down with the high torque of the forced-action mixer. Another argument in favour of the Collomix TMX 1000 for Jens Werner was that the machine has a connection for dust extraction. This criterion was especially important for this construction site, as it was an indoor site. After all, the cement dust that escapes during filling without dust extraction is anything but healthy. A dust extractor was therefore connected to the TMX 1000 on site and work was consistently performed dust-free.

The amount of water added is crucial for ensuring a consistent mixture quality. Here, Werner decided to use Collomix’s water dosing device AQiX on the construction site. The water hose is connected directly to the water dosing device, the desired amount of water is set at the touch of a button, and the device is attached to the edge of the mixing bucket. When the preset amount of water is reached, the device switches off automatically. This ensures that the mixing quality remains exactly the same for each batch. Ready-mixed materials in particular require a high degree of dimensional accuracy when adding water in order to achieve an optimum result. Even slight differences in the amount of water can lead to changes in the material properties or processing. 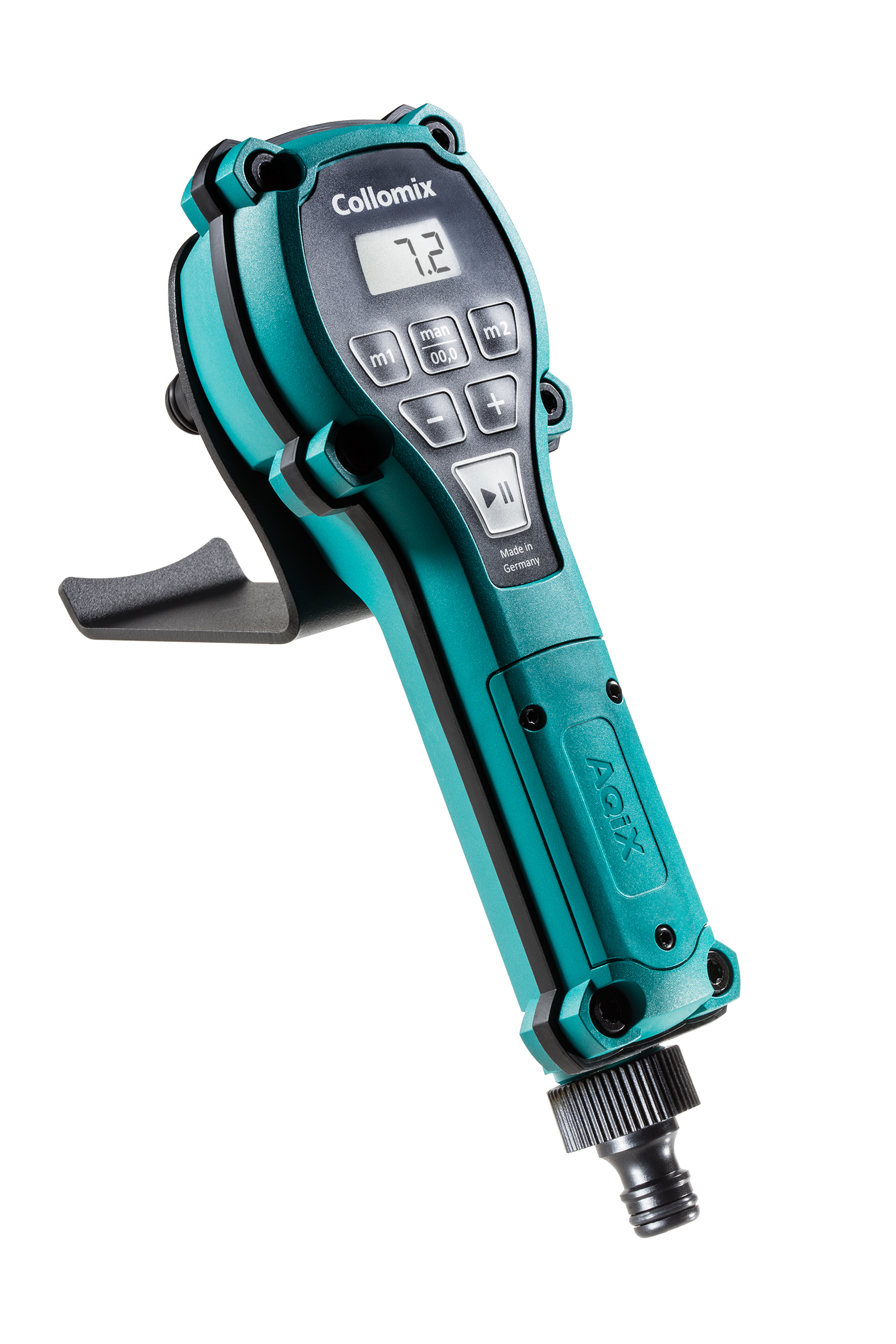 48 mixes in only two and a half hours

In just under 90 seconds, the team from Werner had finished mixing material load after material load. These loads were emptied into a transport bucket via the bottom slide. A trolley was used as the ready-mixed batch weighs around 100 kg. After just two and a half hours, the entire 3.5 tonnes of dry material had been processed into 48 mixes, not least thanks to the Collomix TMX 1000.

For Jens Werner and his team, the decision to opt for the Collomix compact mixer was justified – and paid off – with this project. The high mixing quality in addition to the short mixing and processing times were just as convincing as the machine concept and operation. Even cleaning was quick and easy. As stated by Werner, the company often has to perform screed work and subfloors for terraces also have to be laid. The Collomix TMX forced-action mixer is ideally suited for the mortar required to this end and also significantly reduces the physical strain, concludes Jens Werner. 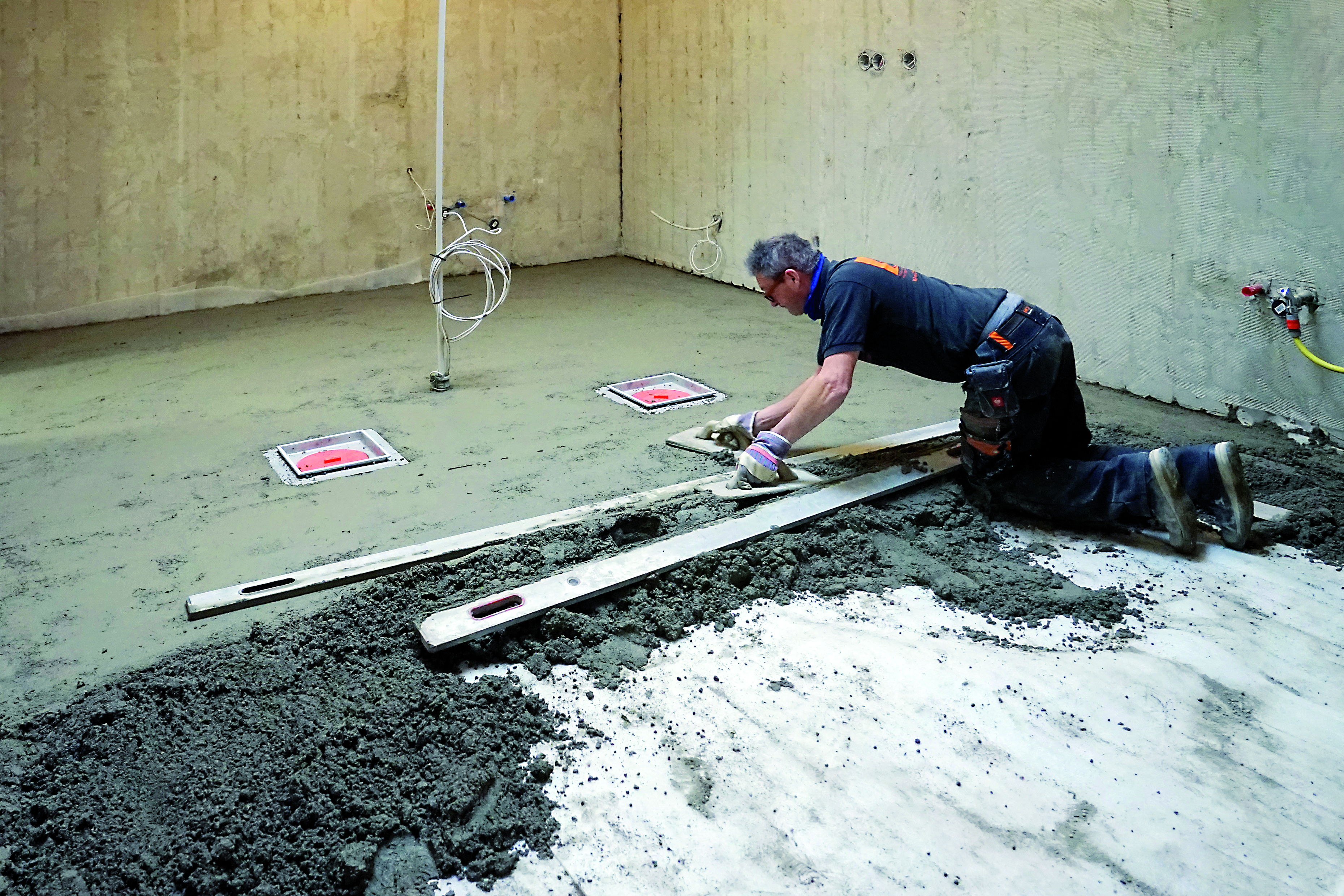 Usage note: Our product recommendations are given according to the best of our knowledge and experience, but we cannot provide a guarantee for their correctness. Therefore, please always refer to the material manufacturer's notes in the technical data sheets and carefully check the suitability of the mixing tools and machines for the task at hand and in accordance with the notes and instructions in the operating instructions for the devices.

Live and on the spot Product Tips Reports

Become part of the community, tell us your Mixing Story!
Home